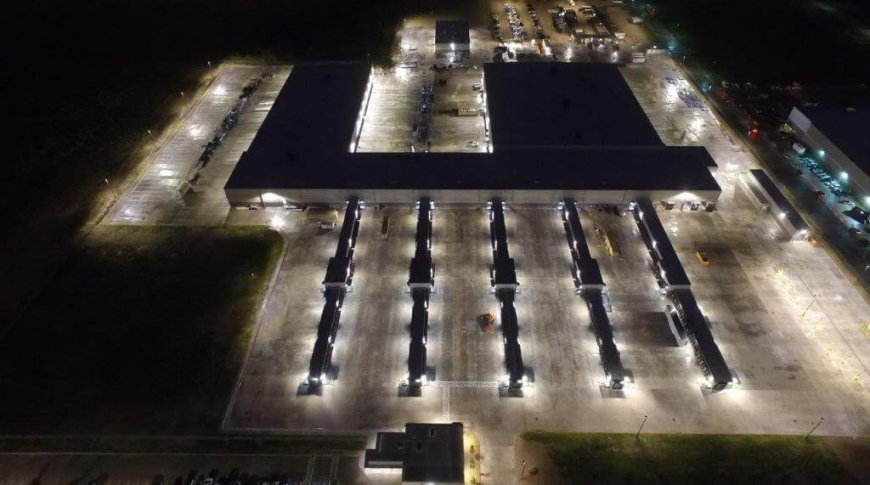 5 fingers designed to maximize the amount of overhead doors for the input area allowing the drivers to quickly unload packages into a fully automated facility. The fingers are approximately 14’-16’ wide, which only allows room for the conveyers to extend the full length (approximately 300’). All structures are built with tilt wall and steel, including the fingers. Additionally, the project included a 56,000 SF mezzanine in 52’ clear high section of the building. Some of the tilt walls in this high bay section weighed 140,000 pounds. The building was powered by two substations equating to 5 megawatts and has the ability to hook up backup generators to keep the critical features of the building running during a power outage. The 6-acre parking field is designed to accommodate the 575 employees that will occupy the building during peak operation at shift change times.

Many challenges related to this site have been overcome throughout the development and construction process. Initially, this site was in the 100-year flood plain and was later removed via an approved LOMR. Several underground utilities and easements had to be relocated, after being relocated for the first phase of construction. UPS had a goal to make this facility operational by November 2018, and Alston Construction was up for the challenge. With the City of Houston permitting process taking so long everyone on the team had to be creative and figure out how to make it work. Everyone knew that we had to start footings in August of 2017 if we were to meet the critical date of getting the building dried-in by January 2019 so the conveyor installation could begin. Hurricane Harvey certainly didn’t help with the schedule.

To complete this project safely, our project team put together a Site Specific Safety Program that set guidelines above the industry standards. Each subcontractor was put through a strict prequalification process, which included: Review of their 3 previous EMR ratings; Review of their OSHA logs from the 3 previous calendar years; and, a review of their OSHA Citation history. Alston also incorporated a document into each subcontractor’s contract known as “Exhibit E- Subcontractor Safety Requirements.” Exhibit E detailed the safety requirements that either met or exceeded OSHA standards. Each subcontractor is required to create and submit a Site Specific Safety Plan for their scope of work, which identified all known hazards and their processes and procedures to eliminate (or minimize) the associated hazards. Prior to gaining access to the work area, each worker was given a site specific safety orientation, detailing the Emergency Action Plan and all site rules that met all requirements. The Designated Safety Professionals were also given an additional safety orientation that covered the expectations and duties of a Subcontractor Safety Representative while working on an Alston Project.